Quito, Ecuador. 1984. Studied Film at the Sorbonne in Paris, France. He edited ten feature films, both fictions and documentaries, and worked on other films and series inside and outside the country in the areas of image and sound post-production. He has directed two professional short films and is an associate producer of the Corporación La República Invisible. Currently, he is also a professor of editing at the Universidad de las Américas and directs his debut documentary Motorcycle Fever. 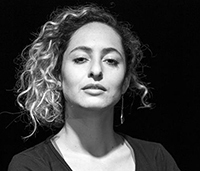 Quito, Ecuador. 1984. Studied film and acting in Argentina. She is the creator and General Director of LA CINTA CORTA, a production company with which she has produced international projects such as, The Itinerant Film Festival, the workshops and screenings tours: CineCita and Living Legends, as well as short films and plays. She has worked on 7 feature films in various roles: casting director, assistant director. She is a professional actress and has worked in film and theatre. Currently she is also a film and acting teacher. Motorcycle Fever is her first feature documentary as a producer.